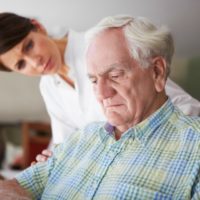 In general, the broad term “elder abuse” is used to encompass several forms of misconduct directed toward individuals aged 60 or older. Elder abuse is considered to be a serious problem in the United States by the Administration on Aging (AoA) of the U.S. Department of Health & Human Services. The AoA reports that, each year, hundreds of thousands of older persons are abused, neglected and exploited. In most cases, perpetrators of elder abuse were found to be family members of the victim.

Elder abuse is a crime governed by individual state law. State law definitions and other specifics concerning elder abuse vary. However, elder abuse can generally be considered as any knowing, intentional or negligent act by a caregiver or any other person that causes harm or a serious risk of harm to a vulnerable adult. Common forms of elder abuse include:

Abuse against older persons is committed most often by family members. Usually, the perpetrators are the adult children or spouses of the elderly victims. Elder abuse can affect people of all ethnicities, social status and gender. However, men are more often perpetrators, while women are more often victims. Most victims are “vulnerable” adults; those who are unable to care for, or protect themselves due to age and/or disability.

One unique form of elder abuse is self-neglect. Self-neglect occurs when an elderly individual fails to care for themselves, which leads to illness or injury. For example, a family member, friend or neighbor may find an elderly person that they know, to be in a physical or mental condition that is hazardous to their health or safety. Self-neglect can include behaviors such as:

All states and the District of Columbia have laws, regulations and/or programs that protect and assist the elderly. If elder abuse is suspected, it can typically be reported via a state Adult Protective Services (APS) agency hotline or to law enforcement. Some states, such as California, require certain individuals, including all employees of long-term care facilities (e.g., nursing homes or adult care centers), to report abuse or suspected abuse. Generally, average citizens are encouraged, but not required to report elder abuse.

As mentioned, all states have APS agencies. Some APS agencies serve only “vulnerable” adults ages 18-59, but most serve vulnerable adults of all ages. Typically, APS workers are the first to respond to and to conduct investigations on incidents of elder abuse. Since these agencies are governed by state law, APS procedures vary. For example, state APS laws may differ with regard to the following: