Fifteen-Passenger Vans Can Rollover for Seemingly No Reason 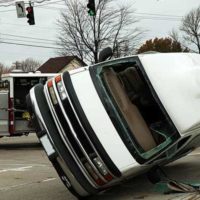 Fifteen-passenger vans are frequently used to transport commuters such as college athletic teams, church groups and employees for company outings. Recent years have seen an increased use of such vans as well as an increase in rollover accidents and injury claims.

Following Rules for Intended Use Still Creates Risk of Rollovers

Fifteen-passenger vans are intended to hold fourteen passengers and a driver. These vans have a higher center of gravity than most vehicles, thereby increasing the tendency for the van to rollover, especially when loaded to full capacity.

Be Informed of the Potential Risks

With approximately 500,000 fifteen-passenger vans currently being used in the United States, there are many potential victims of a rollover accident. Much litigation has developed around the multiple injuries fifteen-passenger van rollovers have caused, and settlements have individually reached millions.

Ford is a major fifteen-passenger van manufacturer that has been subject to a multitude of lawsuits regarding their fifteen-passenger vehicle. In response, Ford has issued warnings indicating that in addition to seatbelt use, drivers of such vans should be “experienced” and “attend licensed training institutions.”